I took over editorship of the Journal from Sydney Miller in 1990 – that issue had 5 articles in 47 pages. For this issue, I look back over editing the FIJ for the past 30 years with, firstly, a sense of relief that the Journal is still going and, secondly, a sense of satisfaction that it has positively thrived and grown in size, stature and quality. For the latter, most credit must go to the level of editorial and production support from the team of dedicated enthusiasts  the journal now has.

The 26th February 2020 was a particularly memorable day. We held our now annual FIJ committee meeting in the Falklands. These meetings always coincide with my annual visit to the islands. Over the past 5 years or so it has usually been Alison,  Nikki and myself conducting a relatively brief, amiable meeting over a long lunch in the Waterfront Café in Stanley…. and the Journal chugged happily on. This year, as we sat at the table in the Museum in Stanley, I looked around with great satisfaction that there were now seven of us present! As I sincerely thanked everyone for their input and contribution to the Journal – including those on the team who lend editorial support and couldn’t be at this meeting – I reflected that, in the past, the bulk of the work in preparing and distributing the Journal had fallen to Geraldine and myself. It is now particularly gratifying to see more and more of the effort, input and enthusiasm come from within the Falklands. This is exactly as it should be and bodes well for the future of what has become an established part of Falklands life and literature. I particularly thanked Alison for her sterling work in the past, and gratitude that, despite some changes in her circumstances, she had expressed a willingness to continue with editorial commitments. Nikki now makes a huge contribution to the logistics and support of taking the journal forward and making it available to a wider readership and it is great to have her backing.

One of the best moves we have made in recent years is to completely align the Journal into  the outputs and activities of the FI Museum and National Trust. While this has the huge benefit of logistics and distribution support in the islands it particularly brings on board the expertise, skills and enthusiasm of Andrea and Tamsin – hugely encouraging for the future. Looking at the list of the skills and experience we all bring to the team (see the end of this foreword) it is no wonder we can face any challenges the future might bring with a huge level of optimism.

Readers will be delighted to notice one significant advance in this issue – full colour throughout. This is now feasible with minimal impact on customer cost through reduced printing costs and local sponsorship. Also, we are now ready to run with a Kindle version of the Journal to be sold through Amazon. This will sell at the same price as the hard copy for the present.

I am sad to report the death, in Australia, of Una Spivey. Una (nee Sedgwick) was born in Stanley in 1931 and was a faithful reader and great supporter of the Journal.

Literally on the eve of going to press, I learned of the passing of Robin Woods. I heard the news with great sadness. Robin’s and my paths have crossed many times over the past 45 years and I am very grateful to have benefitted from, and shared in, the contribution he made to wildlife study in the islands. My first awareness of him was in 1976 when I knew I was going to the Falklands as pasture agronomist. I was eager to read all I could about the islands and the one book I tracked down was his first – The Birds of the Falkland Islands. I found the introduction particularly inspirational and the book (later signed) has pride of place on my shelves. Robin was a huge supporter of the Journal – his paper in the 2001 issue on the number, size and distribution of islands in the Falklands archipelago is still one of  the most widely cited definitive papers published in the Journal. I was particularly pleased that we were able to publish his last paper – on a lifetime of marking, ringing and tracking birds in the Falklands – two years ago. In the next issue we will have a fuller piece on Robin’s legacy.

Over most of my sojurn as editor I have been greatly supported by Stephen Palmer. Stephen has achieved a significant milestone with this year’s entry in the Journal – he has had at least one paper published every year for the past 25 years! Invariably these papers have been the outcome of meticulous research into a topic of Falklands history which would have otherwise lain dormant. The quality and thoroughness of his  papers have contributed greatly to the reputation the Journal has, not only as a repository of local history but of serious academic research. This year’s contribution on Governor Sir Miles Clifford uncovers what would have been a major scandal of its day but which has lain virtually unknown – read on!

Phil Stone’s papers are in a similar vein – they bring an in-depth perspective on a branch of natural science on which the Falklands has so much of interest to offer. His two papers this year are full of interest – amazing to think that five such influential scientists all had links with the Falklands! Bob Burton has thoroughly researched the interesting role that Falkland Islanders played in the defence of South Georgia in WW2 and Edward Walsh has finally unearthed the Deeds of St Mary’s – a search which started in 1974! The range and thoroughness of these articles are a fine reflection of the quality of the research being published in these pages.

David Luxton has a huge repository of early history of the Falklands during the era he was brought up in and lived there. He has an excellent recall of detail and a good collection of photographs which we are so fortunate he is willing to share with us. Juan Bautista Ferrer from Uruguay was living in the Falklands recently while his father worked in the Department of Agriculture, Stanley. Juan’s Highly Commended entry in the Jane and  Alastair Cameron History Prize highlighted the historical, cultural and trading links between the Falklands and Uruguay. Sharing of wider cultures is beneficial to everyone and I am very pleased to print Juan’s interesting project this year – unfortunately it was omitted from last year’s Journal. Graham Pascoe and Peter Pepper have done us a great service in their scholarly dissection of the historical documentation of Britain’s claim to the Falklands. As they quote,” In common with many other places, the Falkland Islands have suffered at the hands of the historian”. They then set out to place the facts before us to quash many of the fallacies which abound over Falkland’s history. I am delighted to publish their account of why they wrote the book and David Tatham’s insightful review-written from an insider’s perspective.

In many ways the history of the Falklands is, first and foremost, a maritime history and in this issue I am very pleased that we have a liberal sprinkling of articles on some of the vessels and events that have been part of that history. The Ilen has been such a part of the working history of the Islands that I make no excuse for focusing on her in this issue: from Richard Cockwell’s excellent painting on the front cover to an update on her restoration in Ireland, and a call from Roger Robinson for any reminiscences or photographs of all the cutters which have played such a huge part in the working life, lore and history of these islands. I am reminded of Brother Anthony’s words as he officially launched the rebuilt Ilen in Baltimore, Co Cork in May 2018 – ‘Land divides people, the seas unite’. I particularly draw your attention to account of a journey Cecil Bertrand made in the Foam from Carcass Island to Stanley and back. It is a fine example of the importance of seafaring and the culture and lifestyle that grew around travel in small vessels in Falkland waters. There are several other articles of maritime interest – the Luigi S and the Bahia Buen Suceso have all played their part and Eleanor Rozee’s account of Carl Anton Larsen and the start of whaling is a reminder of another role the sea has played in our history. David Luxton’s account of a rowing race in Stanley  shows the recreational use of the sea as well.

The Jane and Alastair Cameron History Prizes are a huge encouragement to the young people of the Falklands to be involved in their history and heritage. The way they have tackled the range of projects undertaken is an indication of the depth of enthusiasm and originality put into these projects. The influence of, and interest in, these projects goes far and wide beyond the shores of the Falklands. On a visit to Estancia Harberton, Tierra del Fuego, in March of this year (we just escaped before the Covid lockdown!) I was pleased to present a copy of Amber Barlow’s excellent project on Keppel Island to Tommy Goodall, a  direct descendant of Thomas Bridges, an early missionary on Keppel. Amber’s project highlights that young people can feel real ownership of their history and show their concern for its protection and preservation. These projects cross an amazing range of boundaries from stone masonry, houses, a royal visit, the Falklands war, local businesses – but the underlying feature is people in the Falklands and what they did!

As usual the Museum, National Archives and Dictionary of Falklands Biography updates, illustrate the wealth of resources available to those with an interest in the history of the Falklands.

I express my gratitude to the much expanded editorial and production team, all of whom give freely of their time to produce the Falkland Islands Journal.

I have some spare copies of the first-day cover commemorating the 50th anniversary of the FIJ stamp issue, released in 2017 and now withdrawn. Please contact me if interested (£15 including postage).

I would like to put on record our gratitude to our sponsors for this issue. South Atlantic Trading (Roy McGill) has shipped the journals to the Islands free of charge, the Falkland Islands Company continues its long history of support by selling copies at no profit in their outlets in the Falklands and  Synergy produce the memory sticks referred to below and sponsor the colour printing.

Back issues of the FIJ can be obtained from the Museum in Stanley and the full set of back issues on a memory stick are available in the Pod Gift Shop, Stanley or from the Editor. 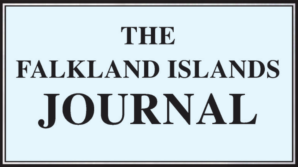